Every day for the last decade, artist Ra Paulette has hiked alone into the sandstone mesas in northern New Mexico with a wheelbarrow and a backpack filled with tools. He heads to the sandstone caves and walks inside. But instead of being greeted with darkness, Paulette’s caves are luminous places where the sunlight pours in thanks to carefully designed and excavated light tunnels, carved by Paulette himself.

Ra Paulette
The site of the caves, in northern New Mexico 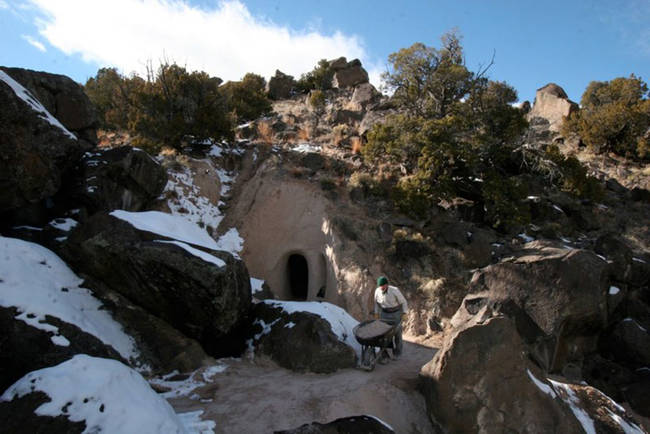 Ra Paulette
Paulette carts the rocks and dirt out by hand, through the inconspicuous, but mysterious-looking entrance to the cave.

Over the past ten years, Paulette has been carving out the caves, without the aid of machinery or anyone else’s help. Inspired by the inward journeys that interactions with nature inspire in humans, Paulette decided to create the inner exploration in the literal sense. The various rooms he’s carved out each have a unique appearance, and are lit entirely with natural light. Combining a variety of shapes, forms and textures, Paulette’s rooms look at once like alien palaces and classic cathedrals. 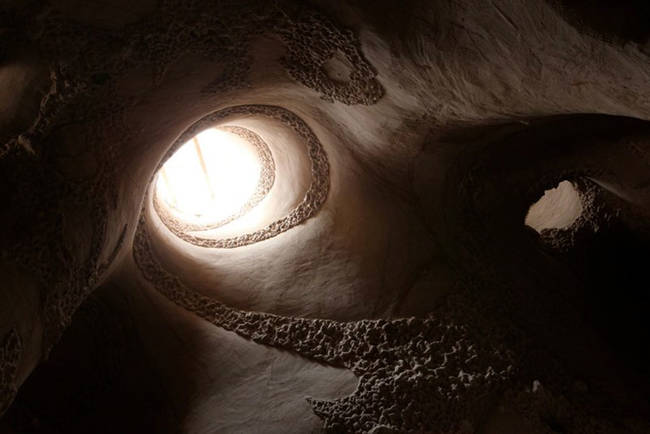 Karoff Films
Without the light tunnels, the caves would be pitch black.

Karoff Films
Each room has a variety of shapes and textures carved into the stone. 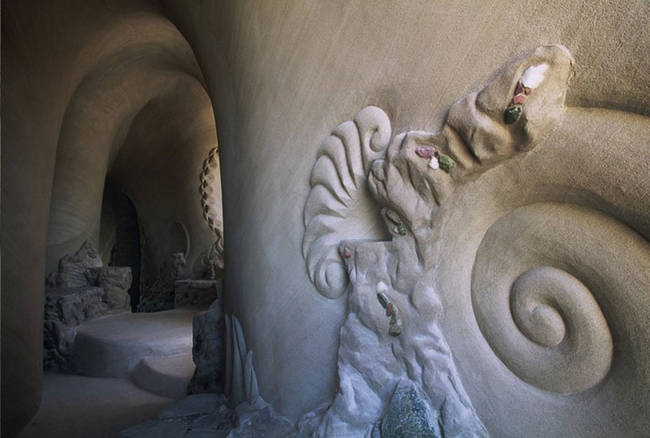 Karoff Films
These carvings incorporate some of the sedimentary sandstone’s natural surprises, like these colorful stones. 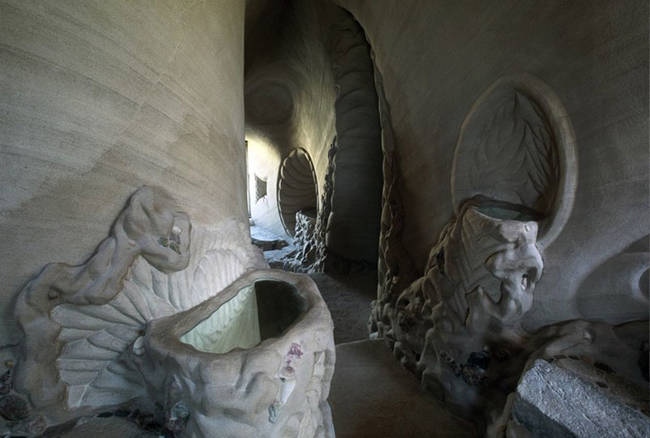 Karoff Films
This room seems to have the addition of a mirror.

Paulette sees the intensive manual labor that comes with a project like this as integral to his self-expression. “To do it well, to do it beautifully, is a “whole-person” activity, engaging mental and emotional strengths as well as physical strength,” he explains on his site. He also discusses the precautions against strain and injury. “When digging and excavating the caves I break down all the movements into their simplest parts and reassemble them into the most efficient patterns and strategies that will accomplish the task while maintaining bodily ease.” Plus, it’s obviously incredible exercise: “[It’s] the secret of how this old man can get so much done.”

Karoff Films
All the work is done completely by hand. 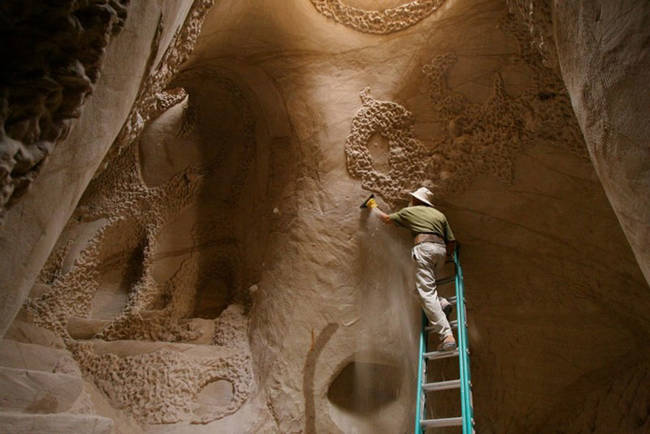 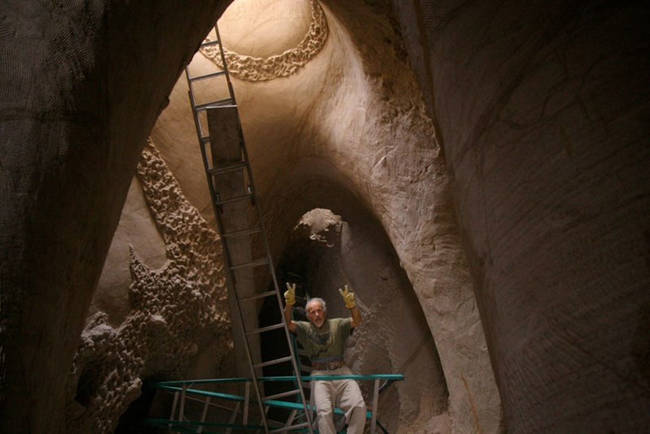 Ra Paulette
It’s important to have fun on the job.

Despite his energy, Paulette considers this project to be his last. The environmental piece is also a social one, and explores not only human relation to nature, but also the nature of solitude. Away from other humans and the trappings of civilization, a space like this lends itself to meditation. Descending into the caves is a literal act of “going within.” At the same time, the space could be easily used as a meeting place for events, bringing people together in a shared, communal experience. Paulette hopes that his caves can provide a service besides being an artistic curiosity; he hopes that they can help people have at least a fleeting transcendental experience that can help them navigate the world around them with greater consciousness. 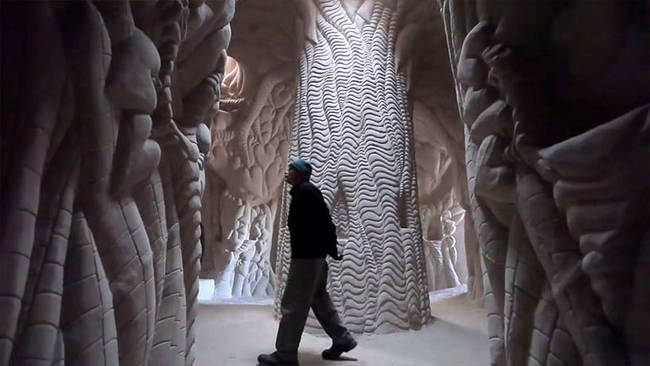 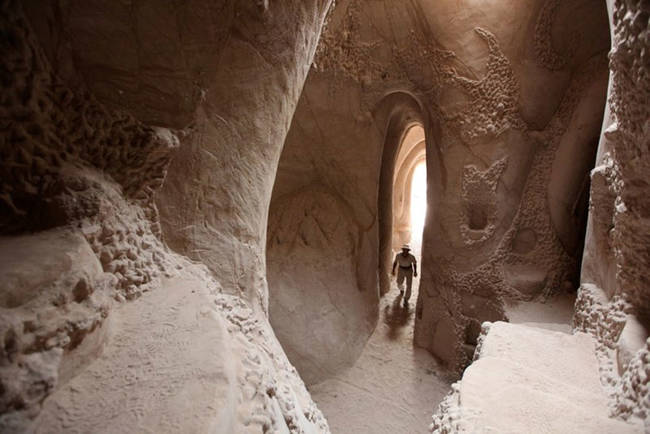 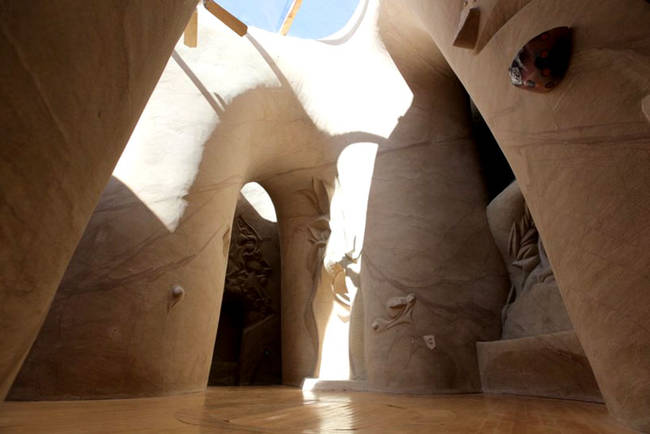 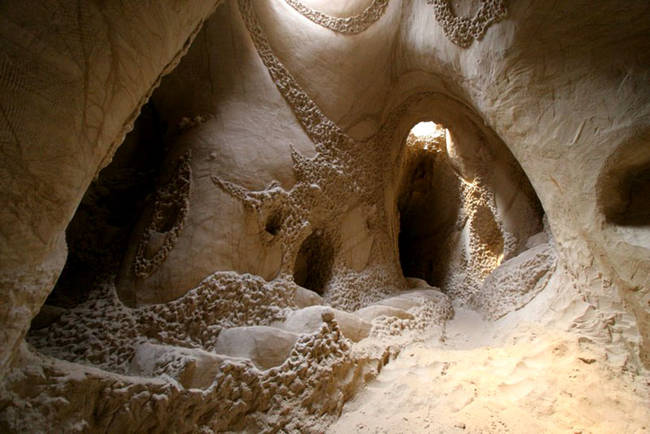 “Changing the world is a tall order. Art doesn’t attempt to force change through direct action but to catalyze it by affecting the emotional basis from which change can occur,” he says. His home area of Rio Arriba County, while filled with good people, has its share of problems, including crime and violence, drug abuse and suicide. There’s also the added tensions that arise when the white, Latino and Nativa American populations clash. He hopes that his caves might, in a small way, serve to bring people together and offer some kind of peace.

At this time, the caves, still in progress, are not open to the public, though they will be one day. In the meantime, you can take a virtual tour thanks to Paulette’s site, or you can check out Jeffrey Karoff’s documentary on the caves.